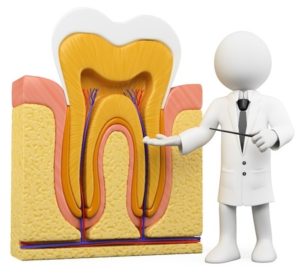 The claims about root canals is that the bacteria that is in the root of the tooth is not fully removed in a root canal. Those against root canals claim that this leftover bacteria can be harmful both to the mouth and to your overall health. Many of these dentists denying root canals are using limited studies about bacteria in the mouth as a basis for their claims.

There is a kernel of truth in these claims. Studies have proven that at least a small amount of bacteria is left in the mouth during most root canals. It is also true that bacteria in the mouth can lead to overall health problems and infection in other areas of the body. However, there is no evidence that the small amount of bacteria that could potentially be left behind in a root canal causes any harm.

Root canals are still recommended by many dentists. They are also promoted by the American Dental Association. A root canal is a great way to preserve your tooth, which is important for your appearance as well as your nutrition. Keeping your teeth intact is important for proper chewing, which affects your health as well as the muscles and bone structure of your mouth.

If you are in need of a root canal and your dentist is against them, contact our offices today for an initial appointment. After a thorough exam, if you are a candidate for a root canal we will happily schedule your procedure.